Whilst David and his team returned ashore to savour their victory after the penultimate race, the battle for second place between the 1986 Andreiu designed Miss Whiplash and the 1992 Ceccarelli designed Per Elisa went down to the wire in the final race. Roddy Angus and Dan Challic’s Trestada had won race nine with Per Elisa second, Tom Florizoone’s Red Cloud third and Miss Whiplash fourth. Whiplash still had the advantage, but with the tricky light conditions leaving the door open for the unexpected there was still a chance for Per Elisa to overtake.

The two boats were locked in battle royal throughout the last race, but ultimately race victory by 19 seconds and second place on the podium went to Paul Pullen, Timmy Bailey, Brian Steptoe, Jonathan Kneale, Edward Bolitho, Oliver Berryman and Amy Sharp sailing Miss Whiplash, with Robbie Tregear, John and Chris Darbyshire, Andy Jenmin, Dave Miller, Adam Furneaux and James Richardson aboard Per Elisa taking second in the race and third on the podium. 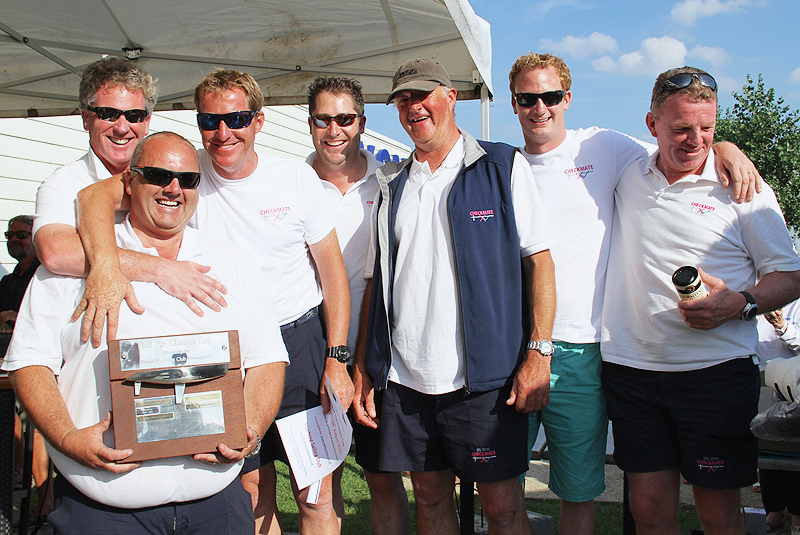 A hugely enthusiastic supporter of the class, David Cullen was a popular winner and magnanimous in his victory, thanking his crew, his fellow competitors, the members and volunteers of the Koninklijke Yacht Club Nieuwpoort and Race Officer Paul Charlier for an outstanding regatta. Asked how it felt to finally have his hands on the trophy after so many years he replied:

“We had a fantastic week, it’s a beautiful place to sail and the organisers are superb. We got a mixture of all kinds of weather, a bit of Irish weather with the rain, light breezes and windy, so we were very happy with our overall performance and obviously to win the event is very gratifying.

“I actually started sailing the original Checkmate with Nigel Biggs when I was 19 – and I’m not going to tell you how long ago that was! I bought this boat from Nigel last year and we have spent all year upside down in it at very windy regattas, so to come over here and keep the boat upright is quite an achievement, never mind finishing and winning the regatta.

ICRA Nationals SurveyFeatured, ICRA Cruiser Nationals, News
Team Ireland Seeks Additional Expressions of Interest for Commodores’ Cup 2016Commodores Cup, Featured, ICRA, News, Regattas
We use cookies to ensure that we give you the best experience on our website. If you continue to use the site we will assume that you are happy with the use of our cookies.OkRead more