ICRA, has awarded its ‘Boat of the Year’ award to cruiser zero National Champion WOW, George Sisk’s Farr 42 from the Royal Irish Yacht Club. The announcement was made today by outgoing ICRA Commodore Nobby Reilly after an ICRA executive meeting in Portlaoise, County Laois. 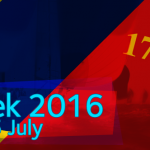